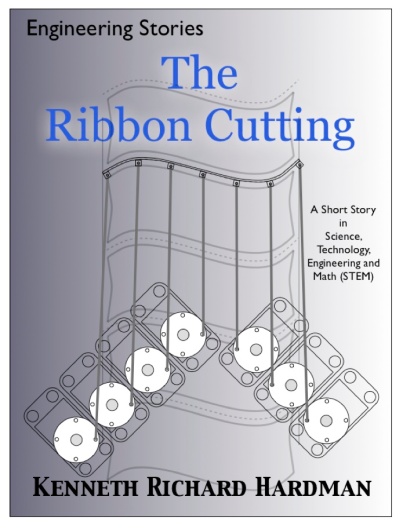 A Short Story in Science, Technology, Engineering, and Math (STEM)

“That’s impossible! It can’t be done.”

Trying to strum a few relaxing chords on his guitar late one evening, Kevin recounted over and over Jack’s words earlier that day at work.

“There’s no way you’re going to get seven precision motors packed into such a small space!”

Kevin’s engineering log book was open on the floor slightly overlapping his favorite music book. He tried to focus on the song, but kept clutching his instrument with both arms, heavily distracted by the challenge of designing a computer-controlled flexible cutter for a new machine at work.

“Maybe he’s right.” Kevin thought. “Or is Jack just trying to protect his baby, his machine?”

Kevin and Jack were engineers at Banner Label. Banner specialized in producing high quantity adhesive-backed labels on large rolls sold to scrapbook suppliers. Following printing, each roll of labels was installed on a reel-to-reel die cutting machine that cut just deep enough to sever the label face but not the backing. The unique thing about Banner cutters was that they seldom cut straight lines, like the kind used on a sheet of self-adhesive address labels. Banner was known for printing labels with curved graphics and curved edges around the perimeter. For example, the roll of test labels Kevin and Jack were using on their prototype machine had images of curved or wavy ribbons, each individual label being a flat image of a ribbon waving in the breeze. Instead of a straight cut between each label, Banner tried to match the cut to the outermost shape of the graphic.

Kevin pulled a small black object from his pocket and laid it on the floor. “There has got to be a way to mount these one-inch wide motors close enough to each other to control push rods that are only three-quarters of an inch apart. But how?”

“Kevin.” He remembered the conversation with his manager the week before. “I’m assigning you to work with Jack in taking the prototype cutting machine to the next level. You need to figure out a way to control the shape of the blade automatically from batch to batch or from roll to roll.”

Jack designed and built the reel-to-reel machine but it was Kevin’s responsibility to design and build the automated cutter.

Within a couple days Kevin developed the basic concept. A thin steel blade about an inch wide, twenty-thousandths thick, and about four and a half inches long. Bonded to one flat side of the blade were seven pivot blocks for pushing and pulling on the blade. Kevin temporarily installed push rods to each pivot block and then provided a way to clamp the push rods so the cutting blade could be manually shaped and held in place during a test run. As the labels passed under the cutter, the sharpened blade was hit from above, causing it to move a few thousandths of an inch downward, cutting the label face. 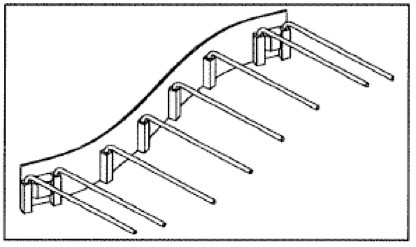 For the next three days Kevin struggled with the requirement to actuate and control the small rods. He filled page after page of sketches in his notebook. Some ideas used mechanical links, some included little pneumatic (air) pistons; he even drew an array of bicycle brake or shift cables, one for each rod, to fan-out the actuated end from the actuator end. Occasionally he would go back and review the fundamental requirement to see if he missed something.

“The plan is to push the seven control rods with servomotors controlled by a PC computer, thereby achieving the desired shape of the blade.”

Kevin gripped his guitar pick more firmly than usual. “If we can do this, it will be a great accomplishment. It will reduce downtime. We won’t have to change the blade between batches. The operators can remove and replace label rolls, enter a new batch number into the computer, and cut the next batch with only a minute or two of down-time.”

He looked out the window for a moment. “Besides, it would be great to prove Jack wrong.”

He looked through his sketches again.

“The control rods are three-quarters of an inch apart,” he thought. “The servomotors are one inch wide, too large to fit side-by-side to drive the control rods.”

He threw his pencil down on his notebook creating a lead divot in the page.

“There is no way,” he thought, “without a lot of cables or something, to mount seven large motors closely together to drive rods that are three-quarters of an inch apart.”

“My B-string sounds flat.” With his left hand Kevin reached under and around the guitar neck and held the third string against the fretboard between the third and fourth frets. He repeatedly plucked the second and third strings, paused to adjust the center tuning peg on the far side of the headstock, then returned to pluck the strings again.

“Whoa!” Kevin stopped plucking and rotated the guitar for a close view of the headstock. “Look at that,” he said out loud.

“There are six strings on…”

AncestorClips are very short stories about very real people. Each clip nurtures awareness of a time, a place, and the character of a man or woman who cultivated a path for our life. The reader feels the good, the obstacles, the happiness, the sadness, and the overcoming. They cheer us, make us resilient when challenged, give us purpose, and connect us to our multi-generational family. Each story is followed by reflections from the author and readers sharing how the story strengthened or inspired them. Ken Hardman is a son, a brother, a grandson, a great-grandson… He is also a husband, father and grand-father. Ken is a professional engineer, engineering mentor, technical writer, and associate technical fellow at a major aerospace company. He is a writer of engineering and family history stories. Please join Ken in reading, reflecting upon, or writing #AncestorClips
View all posts by Kenneth Richard Hardman →
This entry was posted in K-12, STEM and tagged adhesive address labels, art, benchmarking, Creativity, critical thinking, die cutting, flexible spline, ideas, ideation, instrument, label, music, Problem Solving, scrapbook. Bookmark the permalink.