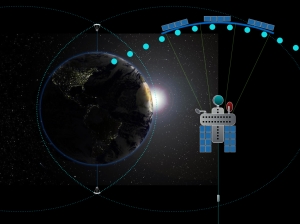 “Then what difference does it make. We’re out of time.”

“Confirmed!” Katya’s was heard by all. “My telescope confirms grapple by both tethers.”

“Confirmed!” Dmitry said. “Holograph from constellation telemetry confirms M-479 in tension by 78 and 80 and in relative motion outward.”

“Based on the perturbation on the two pulling satellites before release,” Dmitry said, “M-479 must be in motion radially outward.”

“Katya,” Flight said. “Can you confirm on your scope monitor the motion of M-479? It appears that…”

“Yes.” Katya said. “The rogue is moving back in line, and…stand by.” Katya adjusted the angle of her monitor to avoid sun glare.

“How much time till station intercept?” Kendall asked.

“Is it moving outward fast enough?” Kendall was sweating in his suit. “And have M-478 and 480 corrected themselves from the grapple impulse and retract?”

“The rogue is now in line and continuing to drift outward,” Dmitry examined his holographic data. “78 and 80 have nearly recovered.”

Kendall and A4 paused their descent and glared out toward the incoming stream of satellites, looking for an anomalous reflection in the strand of beads reflecting in the sunlight.

“There she is,” Kendall raised his right arm and pointed with his space glove. “A4, see that little break in the stream of reflections?”

“Yes, sir,” A4 responded. “M-479 is approaching about a satellite diameter above the stream.”

“Is she still moving outward?” Kendall said. “Will she clear the wing?”

A4 used his visual and electromagnetic sensors to triangulate the position, velocity and direction of the rogue, extrapolating forward to determine if it would impact or clear the wing.

“A4?” Dmitry asked over the radio. “What are your calculations?”

“M-479, at current trajectory will clear the wing, but only by 2.94 meters. That is insufficient to clear the first array of solar panels.”

“Drat! Flight, did you get that,” Kendall said. “We may still have an impact.”

“Captain Parker, this is Houston. You need immediate shelter. If the rogue takes out a few solar panels, you and the platform will be showered by debris. Some of that debris, even at 0.8 ‘g’ will rain down on you like . . .”

“Will the station survive?” Katya called out. “What if debris gets on the maglevs.”

“Not good, Katya,” Kendall and Flight replied, “Not good at all.”

“Kendall, descend as fast as you can,” Flight said. “Get to the escape pods. Katya, get you and your kids out of there.”

Kendall and A4 descended the nanotube as fast as they could, but with less than three minutes to impact, there was no way, especially with all the condensation in his helmet.

“Let’s go Becca and Dmitry.” Katya’s command was heard over the radio.

Kendall knew exactly what his son was doing. He could imagine Dmitry waving his fingers over the holographic sensors on his portable, moving the satellites up and down.

“I heard that,” Kendall felt a glimmer of hope. “Everyone, give your attention to Dmitry. Okay son, do we lower the stream of satellites, to lower the station, to clear the solar panels?”

“No, neither; lowering the constellation that far in two minutes will shear the station and maglevs too much. We need a lateral, out of plane wave.”

“But without the station thrusters?” Flight said.

“All we need,” Dmitry continued, “is to move the solar panels one or two meters to the left or right to clear the rogue. Right A4?”

“Of course,” Becca called out before A4 responded. “Use the M-Sat lateral transfer-functions to perform a coordinated out-of-plane wave.”

“Yes, It’ll cause the station to sway a bit,” Dmitry said, “but still within allowable’s. The maglevs can handle it.”

“I agree,” Becca said. “The dynamics are reasonable.”

Kendall looked at A4.

“To avoid maglev failure and maintain…” A4 said.

“Fuzzy logic, A4, what is your estimate?”

Kendall thought for a moment then said, “That’s not good enough. Katya, get everyone into the Quad and clear the area, now.”

“But dad,” Dmitry said. “I need full bandwidth, full data rate by plugging directly into the Station Bus at the elevator terminal so that the station can re-transmit rapidly along the M-Sat network. From the Quad, I can’t close the feedback control loop tight enough to manage perturbations. The low frequency vibrations may become unstable.”

Kendall looked at A4.

“Ten percent. Zero-point-one probability of success from the Quad.”

“I’m sorry everyone,” Kendall said. “It was a great ride, but if we’re going to save anyone, it’s going to be my family. Katya, get them out of there.”

AncestorClips are very short stories about very real people. Each clip nurtures awareness of a time, a place, and the character of a man or woman who cultivated a path for our life. The reader feels the good, the obstacles, the happiness, the sadness, and the overcoming. They cheer us, make us resilient when challenged, give us purpose, and connect us to our multi-generational family. Each story is followed by reflections from the author and readers sharing how the story strengthened or inspired them. Ken Hardman is a son, a brother, a grandson, a great-grandson… He is also a husband, father and grand-father. Ken is a professional engineer, engineering mentor, technical writer, and associate technical fellow at a major aerospace company. He is a writer of engineering and family history stories. Please join Ken in reading, reflecting upon, or writing #AncestorClips
View all posts by Kenneth Richard Hardman →
This entry was posted in STEM and tagged bandwidth, control theory, escape pod, feedback controls, maglev, NASA, perturbation, quadrocopter, sensor, solar panel, vectoring. Bookmark the permalink.